“Bees are reasonably gentle creatures and not the crazed stinging predators that some people think.”Photo: Melbourne City Rooftop Honey

They might not be your standard household pets, but city dwellers are reaping the rewards of the latest urban trend­ – beekeeping.

Beekeeping in city backyards is becoming commonplace as locals fight to maintain the population of the globally threatened insect.

Peter Dyer is the founder of Backyard Honey, a Melbourne organisation that provides services and knowledge required to host beehives.

Since infiltrating New Zealand four years ago, Australia is believed to be the only Varroa free zone left in the world. Photo: Melbourne City Rooftop HoneySince being established in 2012, the business has grown to host over 100 hives across metro Melbourne.

“Most people get interested in bees because they are concerned about the decline of the bees which is a world wide problem affecting our food security,” Dyer says.

The Varroa mite ­– an external parasite that’s deadly to European honeybees – is considered to be the main perpetrator responsible for the declining global bee population.

Since infiltrating New Zealand four years ago, Australia is believed to be the only Varroa free zone left in the world.

It’s estimated that as much as 80 per cent of the wild bee population in the United States and Spain could have already perished.

“More people are realising that bee populations are under threat, and humans are largely the cause,” says Indira Naidoo​, author of The Edible City.

“The use of certain GMO crops and agricultural pesticides known as neonicotinoids may [also] be contributing to their destruction.”

While Australia is currently devoid of the mite, its existence is a constant threat to our shores.

“Many farmers fear it’s only a matter of time before the mite strikes our hives,” Naidoo says.

The cherry, almond, apple and pear industries are almost totally reliant on bees, which overall play a vital role in Australia’s food production.

“65 per cent of agricultural production in Australia depends on pollination by European honeybees,” Naidoo says.

“35 Australian industries are dependent on honey bee pollination for most of their production.”

The worst-case scenario of the Varroa mite infiltrating Australia is all unmanaged and feral colonies being wiped out, and the loss of 50 per cent of managed hives.

The concept of the organisation was formed when founders Vanessa Kwiatkowski​ and Mat Lumalasi​ saw the success of urban beekeeping internationally in cities such as Paris, London, Toronto, San Francisco and New York City.

The duo saw the opportunity to collaborate with local businesses, placing beehives on their rooftops in exchange for mentoring and honey.

“We not only just share honey with our supporters we share knowledge, connect people and create a sense of community,” Kwiatkowski says.

“All of the hives have been re-homed from either caught swarms or unwanted colonies.”

Environmental benefits aside, those involved in beekeeping find the practice to be an enjoyable and rewarding hobby.

“Suburban bees in managed hives are great because they provide pollination to local gardens and are less prone to disease as they are not constantly moved from one crop to the next,” Dyer says.

“Once people have had a hive, they find a great deal of pleasure in watching the activity of the bees.”

While the mandatory full-length suits may initially daunt beginners, beekeeping is a relatively safe practice, able to be undertaken by anyone who can lift five kilograms and is not highly allergic to bee stings.

“Bees are reasonably gentle creatures and not the crazed stinging predators that some people think,” Kwiatkowski says.

“Working with them reminds us to slow down and take your time, as trying to rush through the hive will result in unhappy bees, so it’s almost therapeutic.

For those concerned about bee stings, an alternative is to keep a box of native stingless bees in the garden or balcony.

“They don’t make as much honey as honey bees but they still do an important job pollinating plants in the garden,” Naidoo says.

The space required for a hive is minimal, but owners should consider the flight path of the bees, the availability of fresh water, proximity to light and always comply with legal requirements.

Set up requires tools including an extractor, protective equipment, a hive and a nucleus colony with a queen and worker bees.

Depending on their management, location and frequency of harvesting, backyard hives can produce between 10 and 80 kilograms of honey each year.

“Time taken to supply a nucleus colony varies, depending on the weather. Expect a basic set-up to cost $500 to $700,” Naidoo says.

It’s Kwiatkowski and Lumalasi’s hope that beehives will become as common as the humble chook pen and backyard vegie patch.

“Bees are the new chickens….The more the merrier we say.”

A proposal to allow hobbyist beekeepers in Los Angeles to maintain hives in their backyards won the support of the City Council’s Planning and Land Use Committee on Tuesday.

The panel approved a draft ordinance setting up rules for urban beekeeping, but under council rules, the City Attorney’s Office still needs to prepare a final version.

Councilman Jose Huizar, who chairs the Planning and Land Use Management Committee, said he plans to waive the ordinance out of committee once the final draft of the ordinance is prepared, so it will go directly to a vote by the full 15-member City Council.

Under the draft ordinance, beekeeping would only be allowed in certain areas of a single-family property, essentially restricted to the backyard.

The rules also call for beekeepers to raise walls or hedges that are high enough to keep bees within their hive area and to maintain a water source near the hives so the bees would not need to venture outside of the beekeeper’s backyard to get hydrated.

If the City Council approves the ordinance, Los Angeles would join Santa Monica in legalizing so-called “backyard” or “urban” beekeeping. The hobby also is allowed in other urban areas such as New York City and Denver.

The Los Angeles Planning Department and the City Attorney’s Office created the proposed rules after the City Council ordered a study last February into ways to legalize backyard beekeeping.

The council action came in response to a growing chorus of Angelenos advocating for “urban beekeeping,” including from some residents in the Mar Vista area who said increased beekeeping helps to fight a troubling, downward trend in the bee population that could threaten the health of local agriculture.

Some council members voiced concerns, however, that the bees could pose a danger to residents, with then-Councilman Bernard Parks referring to the National Geographic documentary “Attack of the Killer Bees,” about a dangerous variety of bees that appear to be encroaching into southern United States.

Planning officials who consulted bee experts over the last year wrote in a recent city report that the variety of honey bees used in beekeeping are “non-aggressive,” but may “sting in self-defense of their hive if it is approached.”

The report adds that when the bees leave their hives to collect food — potentially coming in contact with humans — they “do not become defensive or aggressive or have reason to sting.”

The report also noted that Los Angeles already averages about 8 to 10 feral bee hives per each square mile. The addition of backyard honey bees would not cause a shortage of bee food supply in the city due to the area’s steady climate, but if there were a shortage, the feral populations would likely leave the area to find alternative sources of food supply, according to the bee experts consulted by planning officials.

Will,my husband laser cut this lovely drawing of our STRONG HIVE.
Based on a traditional Japanese hive.Built to last as long as the Bees,(long after we’re gone). 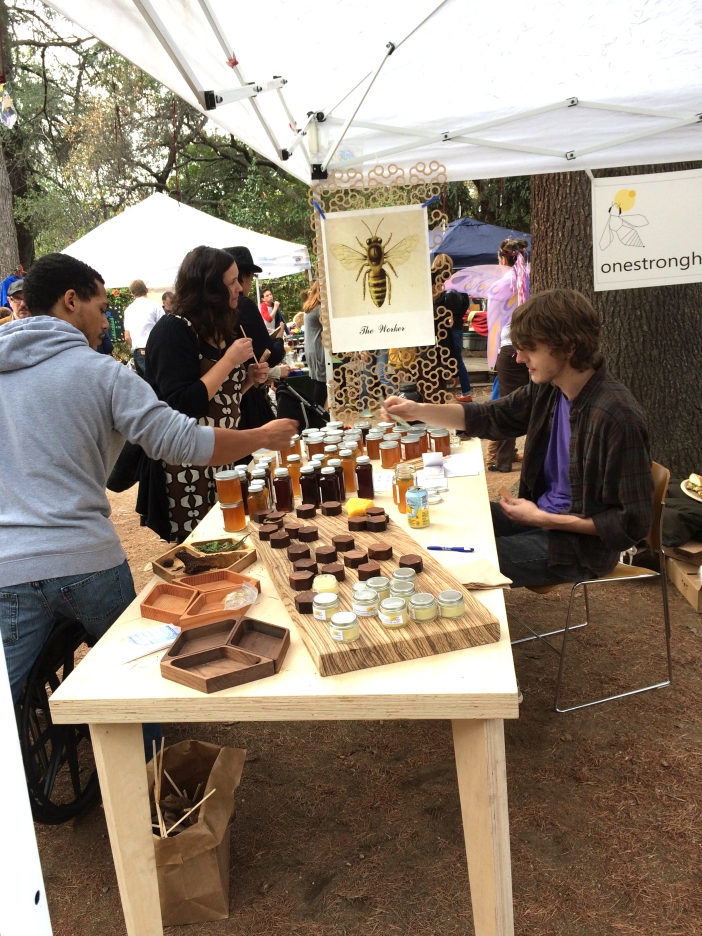 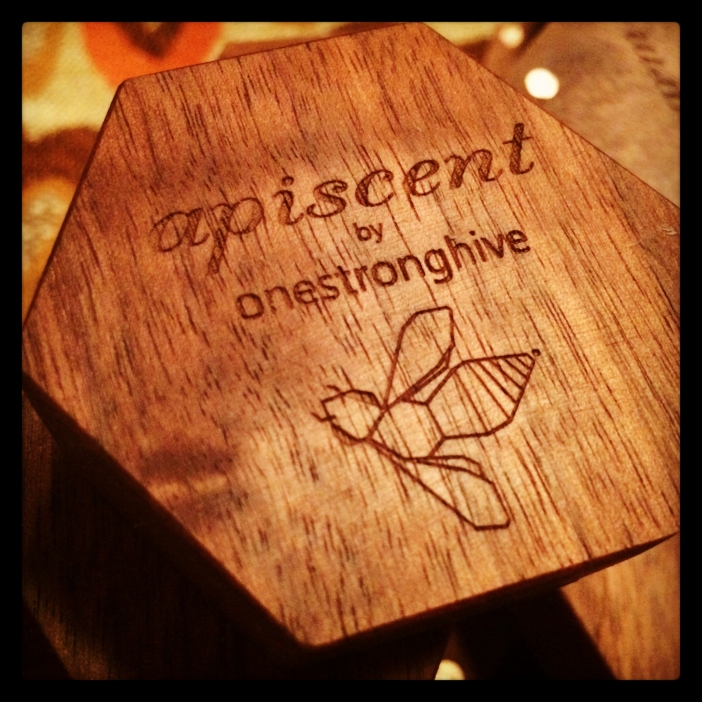 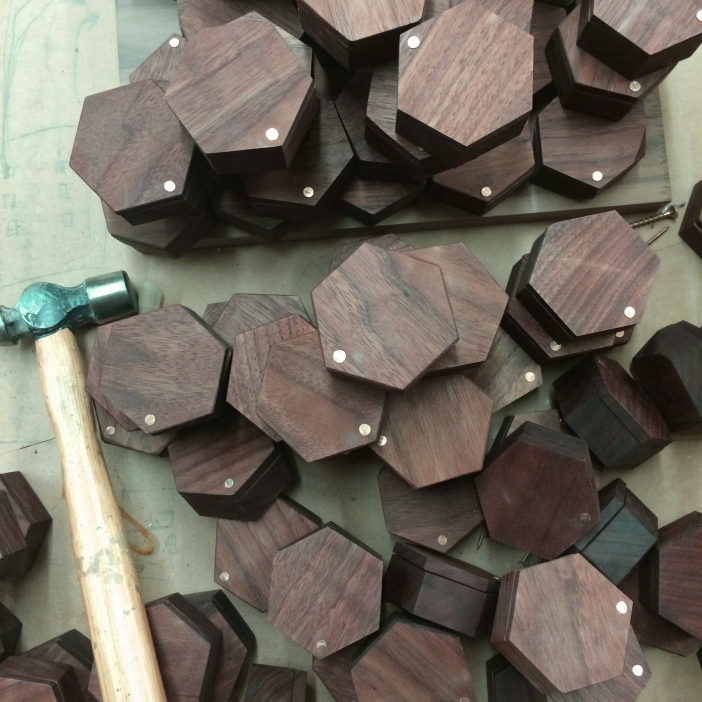 Well here it is the new perfume line.
Scents include Swarm , Flight , Forage and Royal.
More to come with our new product line!